How a GAF Solar Shingle Roof Pays for Itself 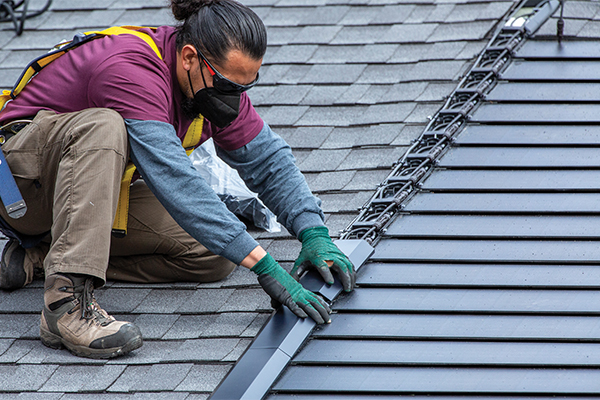 Solar power is the wave of the future. It’s renewable, clean, and efficient, and the options for adding it to your home keep expanding. So instead of limiting your options to giant, expensive panels that are difficult to install, it’s time to look at GAF solar shingle roofs. Here’s everything you need to know about the cost of solar shingles.

What are GAF Solar Shingles?

Solar panels require installation on racks that sit slightly above the surface of your roof. Installation also includes drilling into and mounting on top of the roof material. Solar shingle roofs, on the other hand, replace traditional roofs and the solar shingles only take up a portion. The rest of the material can be asphalt, metal, or another roofing material of your choice. The GAF solar shingle roofs are water-shedding and built to withstand extreme weather, including winds of up to 130 mph.

Known for its traditional asphalt shingles, GAF manufactures their solar shingle roofs by combining the asphalt, which is the top layer, with monocrystalline solar cells, which make up the bottom layer. It’s that bottom layer that generates the electricity. Wiring installed on the sides of the panels connect to your home’s power system to provide the electricity you use daily.

Harnessing the energy from the sun reduces your use of expensive and environmentally damaging fossil fuel energy. It’s clean and renewable, with the sun offering an endless supply of solar power. Not only does it cut down on pollution, but it also reduces your dependency on your local energy provider, reducing your energy bills. It can even provide enough energy to your home to use net metering, an option that lets you put energy back into the grid. When your solar shingle roof makes more energy than your home uses, what you put back gets you credit from the energy company. You can even get tax incentives for installing a solar-producing roofing to boost your savings.

The cost of installing solar is usually the biggest stumbling block for homeowners. However, GAF solar shingles cost less than solar panels. The costs are lower due to the installation taking place at the same time as roof replacement. Additionally, it’s part of the roof instead of being a separate component, which is the case with solar panels. With the affordable pricing, roof installation process, net metering, tax incentives, energy savings, and 25-year warranty, it’s worth considering this new technology.

Solar shingle roof installation requires a roofing professional trained to integrate this material into traditional roof replacement. GAF certifies roofers to ensure they understand the technology and the installation requirements of the solar shingle roofs. Roofing professionals installing them during a roof replacement have described it as easy, streamlined, and straightforward.

In South Carolina, where sunshine is abundant, GAF solar shingle roofs are a great option to help you reduce your carbon footprint and energy bills. Contact Premiere Roofing, a GAF-certified roofing company, for a free estimate on your new solar shingle roof.

From a free estimate, to final inspection, we’ve got you covered!

STEP 1
Contact Us
STEP 2
Get A Free Estimate
STEP 3
Enjoy The Benefits Of A Dry Home
What our clients are saying
VIEW MORE TESTIMONIALS
“Had a leak in the ceiling. Called and they sent someone to check it the next day. The problem was identified and taken care of in a very timely manner. Very satisfied with cost and service.”
Ginger R.
Interested in a new roof or roof repair for your home?
We've got you covered. Get started today!
GET AN ESTIMATE TODAY